In late June 2017, NetEnt released Butterfly Staxx slot machine. This game could be described as a very feminine and soothing slot, but without too much excitement. There’s something similar to NetEnt’s FairyTale Legends games. The atmosphere is magical and when you play the game you feel like you are in a fairy tale world. The game also features scatters, wilds, and big wins. The graphics in the game are really nice-looking, but what else does the game contain? Read the Butterfly Staxx slot review below and you will be ready to take over the game.

Butterfly Staxx takes the player to tropical beautiful landscapes, the center of beautiful nature, and butterflies. In this game, you will find all kinds of flowers. The game is not based on any previously released tittle, although the entertainment world is full of different butterfly-related games, songs, and movies. Butterfly Staxx is a completely unique game and has not been consciously selected for any of the already made-up releases.

The graphics in the game are really colorful just like beautiful fields of flowers anywhere in the world. The background of the game board is a mountain landscape where flowers grow and butterflies fly. The left side of the reels is decorated with a beautiful vine from which flowers grow. In the background of the game board flies butterflies in the middle of the rugged mountains.

It will surely come as no surprise to anyone that NetEnt has again put a commendable effort into graphics. The only thing about graphics that you can click on a little bit is the game buttons. They are not decorated in any way, they are even a little too simplistic.

If you are into NetEnt slots, then you have plenty to choose from since NetEnt is one of the biggest software provider houses that releases new tittles quite often. Butterfly Staxx slot machine has its successor, Butterfly Staxx 2 slot. So if you liked the original, then make sure to check what the sequel is about.

Butterfly Staxx slot machine comes with low volatility which means that the smaller and medium-sized wins will appear more frequently. The game’s theoretical return to player percentage is 96.8% which is a bit above the industry average.

Butterlfy Staxx Symbols – What’s There On the Reels?

The basic symbols of the game are very colorful. The highest value is found in the Golden Butterfly. After this, the best wins will serve red, lilac, and blue flower. The characters with the weakest value in the game in order from the most valuable to the weakest are A, K, Q, and J. When looking at symbols, you can’t ignore their colors. In the same way as NetEnt does with many of their slots, there are plenty of colourful moments. In this case, flowers of different colors.

Wild in the game is featured by an orange-purple flower with handsomely embroidered Wild text on top. Like other games, Butterfly Staxx wild brings the biggest winnings according to the winning table. Wilds can appear anywhere on the reels during both the base game, re-spins, and Free Spins. The wilds replace all symbols on the reels, except scatters.

Scatter in the game works with a pale lilac flower. Scatters launches the desired Butterfly Spins feature in the game, which we will tell you more about later. You can tell from scatter’s beautiful appearance that this symbol brings out the best in the game. 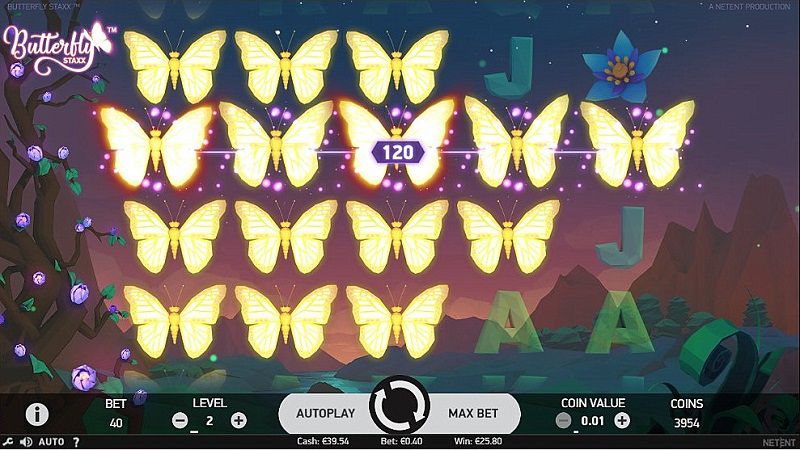 When new golden butterflies no longer appear, this means that the feature runs out and the player is paid all the winnings that have accumulated during the spins. This feature can bring the player really nice size wins and at best it will continue for several spins.

The Butterfly Spins feature starts when a minimum of three scatters appear on the reels. The number of scatters will determine how many butterfly spins a player gets. 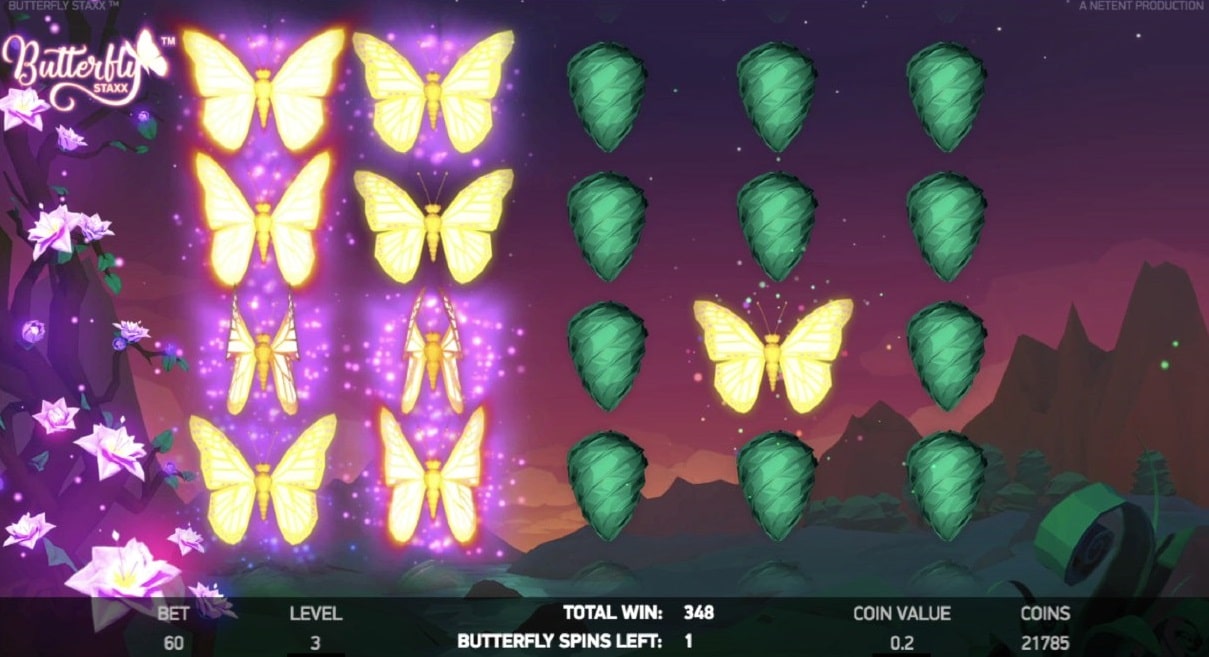 When the player moves to butterfly spins round, only unique cocoon symbols can appear on the reels. These symbols can appear on the reels as passive or active. Active cocoons are the most desirable, as beautiful golden butterflies hatch from them. Once again, these golden butterflies glide to the left of their own line, to an empty place where there is not yet a similar symbol. Symbols stay in those places until the end of the feature.

Once the feature has started the player can no longer win new butterfly spins during the same feature. All line wins will be added to the total profit after the feature ends. During the spin, the player is able to track how many butterfly spins he still has left. The amount won is also displayed on the game board. Butterfly Spins and re-spins feature cannot start playing simultaneously. 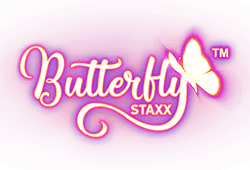 The graphics of the slot are straight out of the fairy tale and who doesn’t enjoy watching beautiful flowers and butterflies. The sound world is also functional in the game. When a big win hits you, however, it changes a little too radically. The bass starts pounding, and for a while you think you are starting to hear a disco in the background.

The game has interesting features. Butterfly Spins are well executed, as this feature also brings out the theme of the game – a beautiful butterfly hatches from a small cocoon. The re-spins feature is also capable of bringing a smile to a player’s face.

It seems cruel to label Butterfly Stax as a basic game. However, it is a basic game in a very positive sense and definitely worth experimenting with. However, the fact is that game houses bring games with so many features to the market that Butterfly Staxx is not the richest game in terms of features.